Artist Benjamin Ferry had walked his dog past Bené Millinery “a thousand times,” he says, before he worked up the courage to go in. The shop on Third Street NW had struck him as “magical” before he ever set foot on the premises. Peering through the window at the remarkable hats displayed inside, and the elderly woman seated behind the counter, he’d feel as if he were gazing into an old Polaroid picture. “I’m attracted to times past,” he says, “before everything got itself into a big damn hurry.”

He soon began to imagine not just admiring the hats but painting them and their maker — preserving and promoting a piece of Washington history that would surely pass away in time. So one day, he took the plunge and entered the shop. As he browsed among the ladies’ hats, lifting some off their stands and examining the laces and flowers, the elderly woman stared at him, he says, and finally said, “The men’s section is in that back corner.” Whereupon, “I blurted out, ‘I want to paint your portrait. I want to tell people who you are,’ ” he recalls.

“You know I’m D.C.’s living legend,” shop owner and milliner Vanilla Beane replied archly. Ferry didn’t know, but he has come to appreciate the truth of the remark in the two years since that exchange. In that time, not only has Ferry become fast friends with Beane and her family, but he has indeed painted and drawn numerous pictures of her and her shop. An array of his oils, pastels, and drawings of Beane and her creations is now on exhibit at the Gallery Neptune & Brown on 14th Street NW (through Oct. 12).

“You know I’m D.C.’s living legend,” shop owner and milliner Vanilla Beane replied archly. Ferry didn’t know, but he has come to appreciate the truth of the remark in the two years since that exchange. In that time, not only has Ferry become fast friends with Beane and her family, but he has indeed painted and drawn numerous pictures of her and her shop. An array of his oils, pastels, and drawings of Beane and her creations is now on exhibit at the Gallery Neptune & Brown on 14th Street NW (through Oct. 12).

Beane is, in fact, something of a legend in Washington’s African American community, whose many headgear-loving fashion mavens prize her elegant pieces. She has been designing and crafting hats for more than 60 years, and though she recently turned 100, she works nearly every day and still mostly hand-sews her designs. In recognition of her contribution, the National Museum of African American History and Culture features an interactive digital display of her and her hats.

It’s a high achievement for what started as a hobby in the mid-1950s. At the time, Beane worked as an elevator operator in a building that housed a hat shop — which was what first inspired her to try her hand at the milliner’s craft. “I self-taught,” says Beane, reminiscing as we chat in her store on a sunny September afternoon. “Richard, the owner, helped me so much. I brought him my hats. He would encourage me and critique them. He told me when I had too many puckers.” Eventually, Richard offered her a job, and she slowly built up a clientele and a fashion network. She became a member of the National Association of Fashion and Accessory Designers, an organization of black fashion designers, which later awarded her prizes and inducted her into its hall of fame in 1975.

Even after she got a job as a mail clerk at the General Services Administration, Beane continued making hats at home. When Richard’s millinery shop moved to Gaithersburg, Md., she bought its supplies and fixtures and started her own business in 1979. It was a family affair, with her daughters helping out on weekends and a grandson after school. The shop helped support the family; in times of sorrow, it provided a haven. “When our brother, Billy, died in a boating accident in 1980,” says Beane’s daughter Margaret Seymour, “the shop helped her keep going.” Beane’s husband, Willie George Beane, died in 1993. (In case you wondered, she was named Vanilla Powell at birth; that she later married a man called Beane was pure serendipity.)

Over time, her work became an indispensable part of many local “hat queen” wardrobes. Ethel Sanders, the proprietor of Lovely Lady Boutique, moved her store from Bethesda to a space near Bené Millinery 20 years ago at Beane’s suggestion. “I did fashion shows” that always featured Beane hats, says the 88-year-old. “People knew us as a team. Women would come in for a dress and I’d send them to Vanilla for a hat. Or they’d go for a hat and she’d send them to me for an outfit.”

The tradition of hat queens is a well-established one in the black community and black churches. “In the past, when most blacks had blue-collar jobs, dressing up on Sundays was a cherished ritual,” says Craig Marberry, co-author of “Crowns: Portraits of Black Women in Church Hats.” “The hat tradition grew out of the idea that you were expressing how God has blessed you. The more flamboyant a hat, the more God has blessed you.”

Beane has white clients as well, like Sherry Watkins, who came to the opening of the gallery exhibit. Watkins is the founder of the Rogue Hatters, a group of 12 women who have all bought Beane hats. Watkins herself counts 75 Beane originals among her more than 150 chapeaus. “Mrs. Beane taught us the rules,” Watkins says. “Don’t match the hat to the outfit. Just buy a hat you like and the outfit will come. Never wear your hat more than one inch above your eyebrows. Slant it to look more interesting and possibly even risque.” 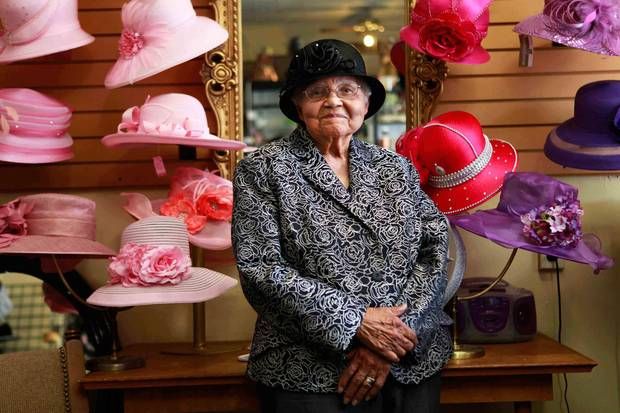 For Ben Ferry, it was important to capture and honor Beane’s contribution for posterity. “She’s part of D.C’s historical record,” he says. An art teacher at the Holton-Arms School in Bethesda, Ferry paints portraits on commission and has taught drawing and painting at the Corcoran College of Art and Design and Georgetown University. Nevertheless, he ran into a little resistance when he made his overture to Washington’s premier hat lady. “I hesitated at first,” Beane recalls. “I called my daughter Margaret and handed the phone to him.”

“What are your intentions, Mr. Ferry?” Seymour asked.

“I believe some people deserve to have their portrait painted, and I think your mother is one of those people,” he replied.

Beane — and her family — agreed, and Ferry got to work, striving to accurately reproduce the lavenders, pinks and blues, the dazzling cream lace, the shades of purple and maroon in her hats. And, of course, to capture the essence of Vanilla Beane herself.

Did he succeed, and please his subject? “I think there are too many wrinkles and such, but I guess that’s what artists do,” says the centenarian milliner. But “everyone [in my family] liked the paintings.” And, she adds, “I did, too.”

If We Can Dance Together