Decades after his death, and decades after he was incarcerated at a Japanese American internment camp, a Berkeley artist’s prolific work is adorning the walls of an iconic American museum.

Chiura Obata: American Modern is on view at the Smithsonian American Art Museum in Washington, D.C. through May 25, 2020.

Scholars of the late Chiura Obata say his paintings have always belonged not only in places like the Smithsonian American Art Museum but also squarely within the American art canon. Until now, however, East Coast centrism and dismissal of immigrant and minority artists have prevented him from securing that spot.

A new show, up through May at the Smithsonian, finally acknowledges Obata’s chapter in the “American story,” his family says.

Seven decades’ worth of Obata’s diverse works are hanging in the Washington, D.C. museum. And seven of his grandchildren got to make an emotional trip to see it.

“It was wonderful to see Obata’s work there,” said granddaughter Kimi Hill. “It’s exciting. And I feel that other people now have access to his work.”

Many people in Berkeley have long been familiar with Obata’s striking paintings of Yosemite’s waterfalls, or his detailed black-and-white images of Japanese American incarceration during World War II.

Or at least they’ve walked by the bright mural painted in the artist’s honor on Telegraph Avenue, where his family had an art studio and supply store.

But Obata, who was born in Okayama, Japan, in 1885 and died in Berkeley in 1975, has not been as well-known outside of California. 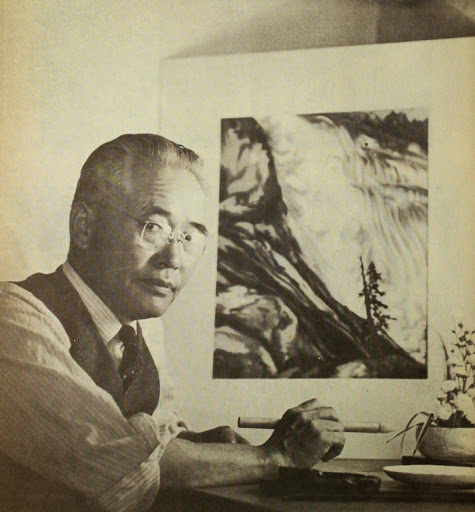 “For people who pay attention to art and art history, when they see ‘Chiura Obata,’ a Japanese name, next to ‘American Modern,’ that creates dissonance,” he said. “The job of this exhibit is to pose that question: What do we mean by American art, and when we talk about modernism, why are we excluding people like Obata?”

Obata came to the United States from Japan as a teenager, already trained in sumi, the Japanese ink-and-brush painting style, and recognized at home for his work. In the U.S. he experienced relentless racism, and soon after arriving in San Francisco, survived the devastating 1906 earthquake. He produced rare sketches of the wreckage.

He later married Haruko Obata, who practiced and taught ikebana, the art of flower arrangement. The Smithsonian American Art Museum exhibit includes Obata’s paintings of his wife’s work. The curator and family wanted to make sure viewers understood she was an accomplished artist in her own right.

“Nothing of her art survived, because it was ephemeral,” said Hill, the family historian whose edited books of Obata’s work. “She created hundreds, thousands of arrangements and had so many students all over the Bay Area. A lot of people have told me over the years, ‘I know my mom took classes from her.’”

In 1927, Obata visited Yosemite, which, along with other national parks, would become the subject of some of his most renowned pieces. He developed a practice of using water from parks in the paintings, so viewers are not only looking at a representation of the sites but actual elements from the sites, Hill said. Capturing the beauty of nature, and teaching others to see it too, was deeply important to Obata.

“His message was always about: respect nature, learn from nature, be grateful,” Hill said. That ethos is reflected in his soothing yet majestic watercolors and woodcuts of mountains, canyons, and lakes.

After a short return to Japan, Obata began lecturing at UC Berkeley, where he would later become a professor, Hill has discussed in talks about her grandfather’s life. He was one of the first Japanese immigrants hired as a faculty member, Wang said. Some of Obata’s paintings of Cal, including a classroom scene, are included in the Smithsonian exhibit.

Teaching was as integral to Obata’s life as art-making, whether in those traditional college classrooms or at the art schools he remarkably opened at two different internment camps.

The Obatas’ lives, like those of so many of their neighbors in Berkeley and beyond, were completely upended when President Franklin Delano Roosevelt ordered the incarceration of Japanese Americans. At the time, the Obatas were working out of the Telegraph Avenue studio, which someone had shot at in the aftermath of the Pearl Harbor bombing. The Obatas closed up their shop in 1942 and were sent first to the Tanforan detention center in San Bruno until they were relocated to Topaz in Utah. Obata diligently documented those experiences in an almost reportorial way, “with an eye toward archival value,” said Wang in a lecture about the exhibit.

One of the pieces in the show, “Departure from Berkeley,” depicts people boarding buses to the camps outside the First Congregational Church.

“I call them reportage because they are really not anything sentimental or emotional,” Wang told Berkeleyside. “Even going through a trauma like incarceration, his images are not making you feel like, ‘Oh, so sad.’ There’s almost an objectivity, like he’s an embedded photographer.” Now they make up one of the most comprehensive collections of first-person accounts of the camps, he said.

Obata believed in teaching art at the camps and elsewhere in part because, Wang said, he thought it taught focus, and thus instilled a sense of calmness in students.

After the war, the Obatas found a place to live in South Berkeley, a few blocks above Grove Street (now Martin Luther King Jr. Way), Hill said, despite redlining confining most people of color west of the street. When Obata retired from UC Berkeley, the couple began leading cultural tours back in Japan.

Finding a home for Obata in the museum

Hill, who began researching her family’s background while working as Haruko’s caretaker after Obata died, has pieced together much of this history. But Wang’s assemblage of “Chiura Obata: American Modern,” over the course of several years, revealed even more about her grandfather’s past.

“He found work that we didn’t know existed,” she said.

Wang said he did a lot of cold calling and went to public and private collections to unearth works from Obata’s grade school years at the end of the 19th Century, through his art from the 1970s. At the San Diego Museum of Art, he discovered 155 pieces of Obata’s that weren’t even in the database, he said.

“The most challenging part was to find museums that wanted to organize it and show it,” said Wang.

Partly, Obata’s relative obscurity is a product of his own making, the curator said: the artist resisted commercializing his work, believing art shouldn’t be made for money.

Several places initially rejected the exhibit, but the Smithsonian American Art Museum is the final stop of five for the show, which Wang said has experienced a very positive reception. UC Santa Barbara’s Art, Design & Architecture Museum was quite supportive of the show, he said, and the curator was told by the Utah Museum of Fine Arts that the show was their first “summer blockbuster in 10 years.”

Both Hill and Wang said the timing was right for the exhibit.

“Even scholarship of American modernism has shifted to, for example, pay attention to minority artists, diasporic artists,” Wang said.

Hill said seeing such a comprehensive array of her grandfather’s art in a museum like the Smithsonian made it feel like his work “was all part of the American story, which were are now getting much more fully, much more inclusive.”

And the emphasis on the natural world feels all the more urgent in a time of climate crisis, she said.

It was rewarding for Hill to see those works hanging alongside other classic depictions of America’s landscapes, she said. Obata’s paintings of Yosemite and the Grand Canyon temporarily live in the same institution as Thomas Moran’s canonical images of national parks. Even after the exhibit closes in May, researchers will continue to be able to access Obata’s work, as materials of his are going into the Smithsonian Archives of American Art.

Hill admitted Obata’s work was not the only draw for all the grandchildren (and two great-grandchildren) who trekked across the country for the occasion.

The Obata exhibit is in the same building as the National Portrait Gallery, where Barack and Michelle Obama’s likenesses, by Kehinde Wiley and Amy Sherald, respectively, are on display.

“It was the first thing all of my relatives wanted to see,” Hill said, laughing.

In the Land of My Ancestors | Ann-Marie Sayers