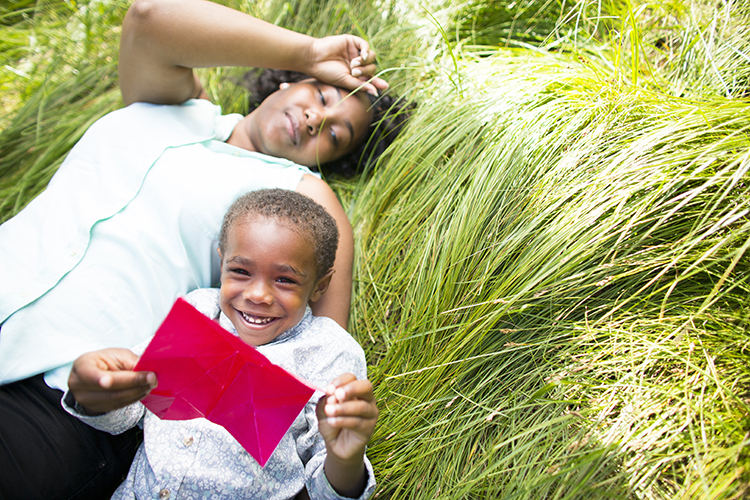 Graduating senior Dajanaye Adrow-Hubbard always knew she was destined for college. She grew up in Oakland in a low-income family and knew that her ticket to a more comfortable lifestyle was getting an education. In high school, she joined College Track, an organization that gives students from under served communities the skills they need to succeed in college. With support from the program’s mentors, she applied and was accepted to a handful of universities, including UC Berkeley.

When she found out she was pregnant as a senior in high school, she never considered changing her college plans. “It was like, okay, I guess me and baby are going to college,” she said. “I didn’t count it out. I was like, well, I guess I’m going to have a best friend to take with me the whole time. I’m not going to be alone.”
But before the 17-year-old could tell her family about the pregnancy, her boyfriend and the father of her baby was shot and killed at a party.
“When he got killed, I told my parents about the pregnancy,” she says. Adrow-Hubbard was worried her mom was going to be mad, but she and the rest of her family were supportive. “They were like, ‘Oh, it’s a blessing. It’s like God is giving you a gift.’ ”

With just a few weeks left of high school, Adrow-Hubbard had her baby boy, whom she named Marius after her late boyfriend. She went back to school, finished finals, graduated and started in Summer Bridge, Berkeley’s six-week intensive college prep program, that summer.
Just 18 when she started at Berkeley, she heard there were resources for student parents on campus and got in touch with the Student Parent Center. Ginelle Perez, the center’s director, connected Adrow-Hubbard with subsidized housing and childcare, and worked with the admissions and financial aid offices to make sure all the right forms were filled out and filed correctly.
Perez also introduced Adrow-Hubbard to a network of fellow student parents and welcomed her to the center’s community space, outfitted with computers, a microwave, learning toys — even educational classes.

Dajanaye and Marius “I just take it day by day,” says Adrow-Hubbard. “Even if it’s a challenge, I found a way — there’s always a way.” (UC Berkeley photo by Elena Zhukova)
“Everyone is so supportive,” says Adrow-Hubbard. “If I need to do homework and Marius is on campus with me, there’s a little play area for him. And if I need to go to class, there’s always someone who offers to watch him. Just knowing I have that support if I need it is awesome.”

For the last five years, Adrow-Hubbard, who is graduating this year with a bachelor’s degree in sociology, never thought about giving up. “Even when I felt discouraged, maybe I was struggling in a class or finals were intense, I always figured it out,” she says. “I’d think, ‘You got this far, you can figure it out.’” And 4-year-old Marius (he’ll by 5 at the end of May) has been by her side every step of the way. “He’s been a part of my journey this whole way,” she says. “I hope he’ll think, ‘Well, my mom did it, this is what I’m supposed to do.’ He told me he wants to go to school on campus when he gets bigger. I was like, ‘Cool. We’re on the right path.’” “This is like Marius’s second home,” says Adrow-Hubbard. “If he’s not at home or at school, then we’re here. I love bringing him to campus.” (UC Berkeley photo by Elena Zhukova)

Never one to slow down, Adrow-Hubbard plans to move to Texas with her fiancé and Marius after graduation, where she will start a Teach for America program. She wants to become a school principal in an urban area, hopefully in the Oakland Unified School District. “I feel like I have something to contribute because I was that student in that environment,” she says. “I made it to Berkeley, but that’s not everybody. Not everyone has that opportunity.”

She says she shouldn’t be the exception to the rule, but the rule itself. Everyone should have the opportunity to pursue an education, she says, and she wants to be part of the solution.

How To Make Expensive Cities Affordable for Everyone Again